Kansas is a state with some lesser laws regarding identity theft. There are several laws in place, but in many cases the charges are considered less severe than most other crimes. Identity theft and fraud falls to a level 8 on the list of all potential crimes in the state. 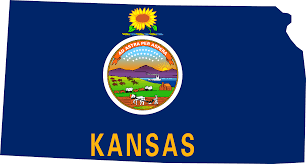 There are two separate terms to know in Kansas related to identity crimes. They are identity theft and identity fraud. These are included under the same law, but are actually known as two separate offenses. Identity theft involves any type of possession, selling, or transferring of personal information belonging to another person.

This includes driver’s licenses, social security numbers, birthdates, a mother’s maiden name, and telephone numbers. Identity theft in Kansas is a level 8 felony, unless the amount of money stolen under the victim’s name equates to more than $100,000. It then changes to a level 5. A level 5 crime results in a minimum sentence of 136 months in prison. A fine amount reaching $300,000 may also be associated.

Altering or creating any type of personal information is known as identity fraud in the state of Kansas. It is a level 8 felony. A level 8 felony may include fines of $100,000. It also includes a maximum of 23 months in a correctional facility.

Using personal information in effort to obtain a monetary gain is identity theft. Minors who use false identification in order to sneak into an adult show, purchase alcohol, or buy cigarettes, are not be included under this law. It is a separate issue that does not deserve such a high level of punishment.

Impersonating an officer, public official, or any profession where a license is required to join is a crime in the state of Kansas. An aggravated account of this crime is done when additional acts are committed while impersonation is undergoing. This includes taking bail as a bail officer, confessing a judgement, or otherwise participating in proceedings where the person being impersonated could be held liable for these actions.

Any consumer within Kansas is allowed to place a security freeze on his or her account. The freeze must be submitted in writing with the associated fee paid. The freeze will be placed on the credit report within a few days, and the reporting agency will then notify the consumer once it is fully in effect.

A number of cases have come out of Kansas involving identity theft and fraud situations.

More than $3 million was stolen in an identity theft ring out of Kansas. The ring included 13 different culprits, who worked together to create fake IDs, steal checks and credit cards, and use other people’s identities to open credit accounts. All total charges between the 13 perpetrators equate to a sentence of 500 years in prison. Aside from identity theft, additional charges include conspiracy to commit bank fraud, carrying a firearm, and possessing methamphetamines. Some were even involved with distributing.

The group split up tasks in an effort to be more efficient. Jeremy Peterson, one of the culprits, was in charge of stealing mail in order to find personal information to use. He had more than 100 stolen mail items in his possession at his time of arrest. The large sum of money stolen included the purchase of two vehicles. A jaguar and dodge challenger hellcat were bought with the false credit cards.

Texas Man Has Identity Stolen By Sex Offender in Kansas

A Texas man has had a number of offenses on his record ever since a Kansas man completely stole his identity. Fernando Neave-Ceniceros went as far as possible to make sure people thought he was a man by the name of Marcus Calvillo. His fingerprints even came up in the system as Calvillo, which earned the real Marcus a long rap sheet. When creditors and law enforcement looked up Calvillo’s information, they found the details of every offense Neave-Ceniceros made under his name. This included indecent liberties with a child, drug offenses, and bribery.

Despite Calvillo’s innocence, it still did not keep employers from believing he participated in the wrongdoings. It led to him never being able to keep a job, his marriage falling apart, and falling behind on child support. Seven felony convictions are currently listed under his name.

Neave-Ceniceros was finally caught after Calvillo sought the assistance of a Wichita prosecutor who won a similar case. The real criminal’s true identity was finally discovered. He admitted to stealing Calvillo’s social security number and taking over his identity in an effort to escape his crimes. He was originally from Mexico and was in the states illegally. After serving a year in prison, Neave-Ceniceros will be deported back to Mexico.

Several helpful resources for identity theft are available to Kansas residents and visitors.

Klegislature.org: The Kansas Legislature includes all laws and regulations set forth in the state. Residents of Kansas can use this website to search laws, including those regarding identity theft.

Ag.ks.gov: The Kansas Attorney General offers a helpful video discussing identity theft and exactly what it means. The video also provides tips for preventing personal information from getting out there.

Kansas.gov: The Kansas Bureau of Investigation website is available to discuss statistics and laws in the area. There is also an identity theft claim form that can be completed, under the Information Services Division Documents.

Kansaslegalservices.org: The non-profit law firm of Kansas offers insightful information for victims of identity theft. The site discusses how these victims can obtain a free recovery plan and file a complaint quickly through the Federal Trade Commission.