Oklahoma has a wide variety of laws pertaining to stealing another person’s identity, using personal identifying information, and obtaining credit cards and accounts in another’s name. These crimes are punishable by a prison sentence, with a minimum of one year spent behind bars. Victims also have rights within this law, such as obtaining a passport proving their innocence in related crimes, and the ability to make a police report in their residing city, whether or not the crime took place elsewhere. 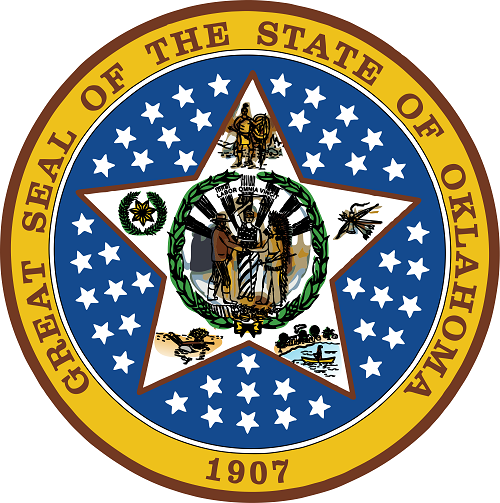 It is unlawful in the state of Oklahoma for anyone to obtain the personal identity of another person. This includes having personal documents or a list of information in one’s possession. A place of employment, address, and full name are just a few of the things included. The law applies whether the identification belongs to a person who is alive or deceased. Between one and five years in prison is the sentence given to offenders of this law. Fines reaching $100,00 may also be applied.

The Oklahoma Credit Card Act states that no person shall possess or control a debit card or credit card without the owner’s consent. It is also unlawful to use a lost card that was found. Selling a credit card or purchasing one from a seller are also considered a crime under this law. The maximum prison term for this offense is seven years. There may also be fines of $3,000 if convicted.

Obtaining Information From a Financial Institution - 21-1533.2

Making a false statement in an attempt to obtain the personal or financial information of another person is a felony crime in the state of Oklahoma. Presenting false documents in an effort to obtain the information is also unlawful. Both instances earn the perpetrator a maximum prison sentence of ten years.

Any victim that files a police report and has verifying documents can apply for an identity theft passport under the Oklahoma Program. A certified copy of a sealing of records or expungement of records in the case may also be utilized to prove the crime took place. The Oklahoma State Bureau of Investigation will issue the passport, and must immediately notify the Department of Public Safety so all main agencies are aware of the situation.

All records kept by these two agencies needs to include a copy of the passport. This is mainly for the purpose of criminal background checks to show the passport owner has been a victim. Financial institutions do not have to honor a passport of this nature, but can do so if they wish.

There is an anti-phishing act in Oklahoma that prohibits the use of email when the intent is fraudulent. Any online communication that is misrepresented, such as stating it belongs to a particular company when it actually does not, is against this law. Any email that links to a false web page in order to get victims to enter their personal information is also prohibited. Obtaining any type of personal information through online methods that will cause harm or fraud will earn the offender a charge. It can be sentenced as a misdemeanor or felony, depending on what the prosecutor decides.

The website that was wrongfully used, or the email provider, may file a civil suit against the offender. This could result in a $100,000 penalty for each instance.

It is a felony crime in Oklahoma to intercept any type of communication or personal information belonging to other people. This is part of the Security of Communications Act set forth in the state. Electronic, oral, and wire communications are all off limits. Intercepting this type of information, especially to use it to one’s own advantage, will be punished by a maximum prison sentence of five years. There may also be costs of $5,000 associated.

Falsely personating another in an attempt to gain property or money is known as false personation in Oklahoma. This crime is a felony, earning a similar punishment for the crime of larceny. The value of the property or money stolen while under this false identity will determine the length of punishment, as well as the associated fines that will have to be paid. A maximum of ten years is prison is usually given for a crime of this nature.

Oklahoma has a number of valuable resources that victims of identity theft can use to find the information they need for reporting the crime and repairing their credit.

Ok.gov: The Oklahoma State Bureau of Investigation discusses identity theft passports and what needs to be done to obtain one. The type of application depends on the situation, such as having a criminal report on the matter, or using a credit report as a means to prove the crime.

Normanok.gov: The city of Norman has a police department with an Investigations Division. Identity theft is one of the main crimes they look for, as it is has been rising over the last several years. Their site describes what identity theft is, as well as what people should do if they fall victim to it.

Ou.edu: The OU Police Department of The University of Oklahoma provides various tips on Internet safety. This includes discussing identity theft and how the crime can be prevented.

Oklahomalegalgroup.com: An Oklahoma theft attorney often focuses on the common types of theft, such as retail theft and theft from a home or building. They also specialize in identity theft, which has come up more frequently in recent years. Their website discloses which crimes are considered in this type, as well as the common penalties for them in the state.

Ncsl.org: The National Conference of State Legislature provides details regarding all identity theft crimes and punishments throughout each of the states. Oklahoma is included on the list, with various crimes detailed as having felony punishments.